There are few industries in which the status and profiles of women need to be raised more than the publishing world. In the traditionally male-dominated industry, women have historically been paid less than men, even though women helped publish the first newspapers in the US. Studies have also shown that aspiring female authors also have not had the same opportunities in the publishing world as men.

One woman in that industry is helping to change that. Alesha Brown, head of Alesha Brown LLC, which owns Fruition Publishing Concierge Services, a company that seeks to simplify the book publishing process – especially for new, female authors – is making strides to reshape the publishing business.

‘Never Intended to be an Entrepreneur’

Alesha Brown launched her own publishing company after being denied a well-deserved raise.

Brown launched Fruition in 2015 after being denied a raise at her old company, although she wasn’t intending to start her own business. But, she decided that this was the best way to pursue her dream of helping struggling authors publish their works.

“Believe it or not, I never wanted to be an entrepreneur or small business owner,” said Brown. “I launched into business after a salary adjustment denial resulted in me investing in my side hustle, which was birthed when I self-published my first book. The more I promoted my book, the more audiences sought advice on how to publish a book.

“They wanted someone to give them information and walk alongside them in the process. The business grew so much in one year that I had to decide whether to resign from my government position or give up my growing business. The thought of quitting on myself seemed so egregious, especially for a company that was not invested in my growth and long-term success. The decision was easy to make, and I have not regretted it since, challenges and all.” 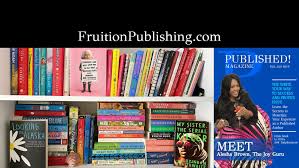 One of the main reasons Brown launched Fruition is that she wanted to help aspiring authors avoid the many potential scams and legal pitfalls in the publishing world. There are many illegitimate companies out there that promise to publish books for large fees and never do, or companies that create contracts that give them most of the profits when a book does well.

“What is unique about this business is that I, as its founder & CEO, expose the legal pitfalls and scams prevalent in the industry. I do so boldly on the industry’s mainstream stages, associations, magazines, and journals to avoid the exploitation of women and underrepresented voices in the publishing industry.”

Fruition Publishing is thriving despite lack of access to capital early on.

Brown, who is African American, said a lack of funding and access to key decision makers at publishing companies is all too common in the publishing world, especially for women of color, and she aims to help change that.

“As a double minority, I have had to overcome starting a business with no investors or large capital reserves in an industry where diversity, inclusion, and equity do not exist,” she said. “The publishing industry is one where minority leaders, writers, and authors are not revered and seldom have access to its key decision-makers and gatekeepers, which impacts their success and profitability. As important as continued education is, relationships with the industry’s gatekeepers have really made a difference for my business and the clients we represent, especially during the pandemic.”

Pandemic is Good for Business

The majority of small businesses continue to deal with a plethora of economic challenges, many of which have been brought upon by the COVID-19 pandemic, Brown says that the publishing industry is no different.  Yet, while the publishing world is feeling the crunch of supply chain shortages and inflation, more people are seeking to write and publish books as they work from home and have more time to reflect on their lives.

“Actually, the pandemic led to an influx in business because people felt a sense of urgency in ending procrastination and making sure they fulfilled their dream of becoming a published author,” Brown said.

“Others saw the potential profitability at a time when the world was at a standstill, and audiences were reading at all-time high rates. However, the publishing industry is dealing with ongoing supply chain shortages affecting printing and production, such as paper and ink shortages, labor shortages, delayed delivery times, etc. This is where leveraging technology and digital products have served us well.

Don’t Forget to Check Out All of our Women’s History Month Profiles!

Beyond Sales: How to Measure and Improve Customer Lifetime Value