The survival of the nearly 22,000 independent grocers in the US will certainly depend on whether they can phase in certain hi-tech services to their businesses in the future, but for right now, research is showing that they can take their time, as online grocery delivery services being touted by giants Amazon and Walmart will not impact them as much as previously thought.

Research shows that the majority of consumers are still willing to make the weekly trek to their local grocery stores to buy food for the week, and they still want to see and smell certain products – such as meat and produce – before they buy them, which they obviously cannot do online.

Online Shopping Not a Huge Threat – Yet 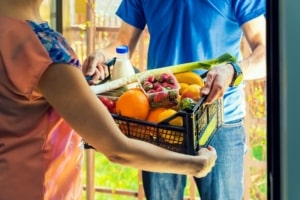 The jury is still out on the popularity of online grocery delivery services.

Even since the start of the pandemic, consumer behavior when it comes to grocery shopping is largely unchanged – approximately 80% of consumers still prefer to buy at least some of their groceries at a physical store, according to research by PYMNTS.com.

Of course, online grocery shopping isn’t new – it’s been around since 1989 when Chicago-based Peabod, owned by Netherlands-based Ahold Delhaize (which also owns the Stop N Shop and Food Lion), introduced the concept. Since then, Fresh Direct was introduced in 1999 and has grown to roughly $600 million in revenue in 2020.

The fact is that even during the pandemic when consumers had to shelter in place, the percentage of consumers who switched to purchasing groceries entirely online since the start of the pandemic grew to just 17.2% from roughly 14%.

Pantry’s Failure – What it Means

Another big indication that online grocery shopping is not as big of a deal as many may think right now is the discontinuance of Amazon Pantry in March 2020. Originally launched as Prime Pantry in 2014, it allowed Amazon Prime and non-Prime members to purchase individually packaged, non-perishable household goods into multi-boxed items to compete with bulk supermarkets such as CostCo or Sam’s Club.

Still, others have argued that Pantry’s failure was due to the fact that many consumers still prefer to shop at brick-and-mortar grocery stores, especially ones that offer bulk discounts on items such as cleaning and hygiene products.

Specialty Shopping on the Rise

Online grocery ordering, however, has never really penetrated 20% of the market. Nearly 64% of 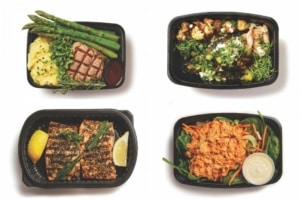 Pre-prepared meals will be an integral part of the future of the grocery industry.

shoppers do buy some groceries online according to PYMNTS.com, but it is worth noting that many of these online purchases are often made for specialty foods. Indeed, the popularity of sites such as gourmetfoodstore.com and nuts.com that offer specialty, hard-to-find food items have grown in popularity over the past few years.

Also, online services that deliver daily and weekly supplies of healthy,  pre-prepared meals such as Blueapron.com and Freshly.com rose in popularity, especially during the pandemic, and larger grocery chains such as Wegman’s and Krogers began offering pre-prepared meals in their aisles, as well as fresh sushi and soups to go.

If independent grocers want to keep up, they should also be offering prepared meals for the convenience of consumers, who growingly want to spend less time shopping and cooking. They should also become part of the supply chain that large chains are not part of by offering specialty foods – especially ethnic foods that might appeal to their local communities that aren’t offered by Walmart or Amazon.

How Big will Instacart’s Influence be? 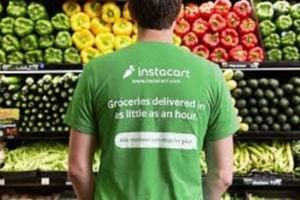 The Grocery industry is keeping a close eye on the success of Instacart’s services.

One of the companies that many analysts are watching closely right now is Instacart, which introduced the novel idea when it launched in 2015 to partner with major retailers such as Kroger, Albertsons, CVS and ALDI and act as a third-party grocery delivery system to local communities. Between 2019 and 2020 – the first year of the pandemic – the company’s revenues tripled to $1.5 billion.

Instacart makes it easier for large retail grocery store chains to offer grocery delivery without having to invest the onerous resources in setting up that service themselves, and offering consumers the convenience of getting food delivered right to their homes.

While Instacart has had some success, the company also has gained plenty of detractors. News stations from the West Coast to the East Coast have run stories on the exorbitant markups in prices that the company slaps on to the groceries it delivers. These price increases are in addition to the company’s annual membership, service and delivery fees it charges. Only Time will tell if enough consumers are willing to pay Instacart’s prices before we see whether the service has an impact on the grocery industry.

It is possible for independent grocery retailers to compete with the likes of Amazon and Walmart. Some changes they might consider are:

While independent grocers do need to prepare for the future by investing in new technologies to match new consumer behaviors, they don’t need to make all of the changes right away.

Online grocery ordering is probably the wave of the future, but remember that it’s growth has been slow, even in the face of the pandemic. Your best bet is to invest in the future at your own pace and in a cost-effective way.

Finding the Right Business Credit Card with No Annual Fee

How Kristin Wallace is Changing the World of Freight with Atlantic Freight ...
Scroll to top