Despite some relatively good news about the economy over the past month, most (51%) small business owners that comprise the membership of the National Federation of Independent Business(NFIB) believe they will see worsening economic conditions over the next six months – the highest percentage the NFIB has ever seen in its 48-year-old Small Business Optimism survey.

The worry over inflation, however, comes amid both good and bad news about rising prices. The bad news is that the Consumer Price Index for All Urban Consumers (CPI-U), the index that most financial institutions look at as a measure of inflation, skyrocketed to 9.1% in June – more than a full percentage point above May and the highest since 1981 – with rising gas and housing prices and insurance rates all leading the way.

The good news is that the core Personal Consumption Expenditures (PCE) Index – the index that measures the prices of consumer goods excluding fuel and food – only rose 4.7% from May to June, which was lower than what most economists predicted. The Federal Reserve Bank uses the PCE index as its main measure of inflation. This suggests that the rise in the costs of consumer products lag somewhat behind the rise in costs of essential items such as gas and food. The bottom line is that the two may not be having as big of a correlation as many believe.

A large percentage of small business owners surveyed by the NFIB (47%) said that they have job openings that they can’t fill, mostly in the transportation, manufacturing and construction industries. That number, however, is down from 51% in May and reflects a national trend that the hiring climate may be slowly improving.

The NFIB survey also showed that 40% of small business owners cited supply chain disruptions as a major problem, a number largely unchanged over the past three months. Global pressure on supply chains has certainly been very real since the end of 2021 as the world slowly crawls out of the COVID-19 pandemic, and many economists are predicting that those problems will persist well into 2023. 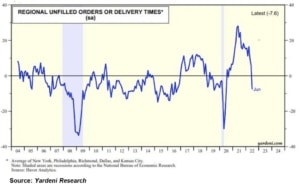 Yardeni Research found that delivery times – one of the main measures of supply chain efficiency – have been improving.

Some research is suggesting, however, that national supply chain problems in major economic hubs have been slowly easing this year. Economist Ed Yardeni of Yardeni Research studied delivery times – one of the main measurements of supply chain efficiency – in five major Federal Reserve Bank regions – New York Metro, Philadelphia, Kansas City, Richmond and Dallas – and found that those delivery times have been improving.

Yardeni found that delivery times in all but one of those regions – Dallas – have improved since April.

“The question is whether the drops in regional indexes tracking unfilled orders and delivery times during the first half of this year reflect more ample supplies or diminishing demand,” he wrote.

If the NFIB Small Business Optimism Index reveals anything, it’s that small business owners are facing some unprecedented challenges and may have to adjust their prices and offerings as a result. While that is certainly the case in many instances, there are also some silver linings in the challenges small business owners are facing that indicate that economic conditions may be slowly improving.

With many economists predicting a recession later this year and into 2023, however, it could be the case that the economy gets worse before it gets better in the immediate future. Small business owners would be well-advised to slowly raise prices and compensation levels for their employees to meet some of these challenges, as well as prepare for an oncoming recession by trying to cut operating costs where they can and arrange for additional financing if needed.