The labor shortage remains stubbornly high for businesses across several different industries despite the high number of job openings, even as many predict that the current recession will eventually level the playing field between employers and workers. Small business owners continue to feel the brunt of the shortage, as many of them can’t compete for workers in the labor force with larger competitors when it comes to salaries.

So which industries are getting hit the hardest in terms of unfilled job openings and worker shortages? Based on information gathered from the Bureau of Labor Statistics, the worker shortage continues to affect companies with both hourly and full-time workers for different reasons. Here are some of the most impacted industries. 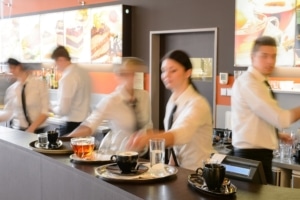 A shortage of table servers has been felt by nearly every independent restaurant in the past two years.

Restaurants had a quit rate of 7.6% in September 2022 – the highest of any industry measured by the BLS – with 193,000 job openings compared to 139,000 new hires, leaving 60,000 job openings. These include table servers, cooks, bartenders, and other staff. The National Restaurant Association (NRA) predicts the shortage will continue for the rest of this year and into 2023.

Restaurants laid off thousands of workers during the COVID-19 pandemic, and those workers have been slow to return. The reasons include low wages – the federal minimum wage for tipped workers is still $2.13 per hour (the NRA, ironically, has lobbied Congress every year for a decade against raising that wage). Restaurant jobs also often require long hours, low pay, and no benefits. According to a study by Blackbox Intelligence and Snagajob, 15% of restaurant workers left the industry during the pandemic to move into different industries that offer higher wages and benefits, such as education, warehouse jobs, and starting their own businesses.

Retail workers had a quit rate of 4.9% in August 2022, with job openings outpacing new hires by more than 25,000. This follows the laying off of over 2 million retail trade workers due to store closings at the height of the COVID-19 pandemic. Amazon predicted in a recent report that it could run out of warehouse workers by 2024. Many retail workers laid off during the pandemic decided to switch careers or retire.

Despite the median salary of retail workers increasing to $18.50 per hour in August 2022 (from $14 per hour before the pandemic), a study by Cogsy showed three main reasons retail stores are having a hard time finding workers:

The transportation industry, including truck drivers and rail workers, saw a 4.6% quit rate in August 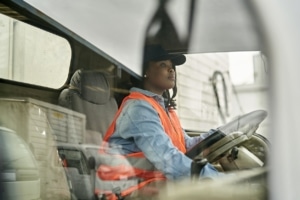 A nationwide shortage of truck drivers has contributed to supply chain disruptions and inflation.

2022, as the US faces a shortage of about 2.6 million truck drivers overall, despite a general increase in pay. This shortage not only affects the roughly 3.1 million transportation and warehouse small businesses in the US, but it also is one of the root causes of the recent global supply chain disruptions.

Like with many industries, the worker shortage in transportation existed before 2020 but was compounded by the global pandemic. According to business consulting firm MossAdams, the primary causes of the shortage isn’t salary, it’s due to the fact that the job requires long hours away from family, the fear of contracting COVID-19 and the fact that the transportation workforce is aging, and few millennials and GexXers are willing to replace them.

Industries that require skilled workers are also facing a massive labor shortage, and salary may not be the overriding reason. In August 2022 there were 1.7 million job openings in this industry, particularly for nurses, while only 717,000 were hired. According to the American Medical Association, the country will also face a shortage of some 38,000 to 124,000 primary care doctors over the next 12 years, even though salaries in these professions are typically higher than the national median household income.

According to the AMA, many medical school graduates are becoming discouraged by the fact that independent primary care doctors’ offices are being quickly swallowed up by large health care providers. That, combined with doctor burnout from the pandemic; rising medical school debt; increased medical malpractice insurance premiums, and the red tape that independent doctors often face when it comes to sharing electronic health records, many hopeful doctors have been discouraged from entering into the industry.

One-Third of Nurses Plan to Leave 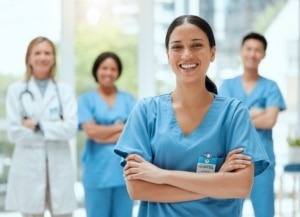 Job burnout is the predominant reason for the shortage of nurses in the health care industry.

A study by Fierce Healthcare showed that one-third of nurses across the country plan to leave their job over the next year, exacerbating a problem that the healthcare industry has been suffering from since before the pandemic – a national nurse shortage. Last year, BLS data showed that the country is going to need an additional 275,000 by 2030. Despite a median national income of over $82,000 per year for registered nurses in the US, many are quitting due to burnout, according to the study.

Most healthcare facilities were already suffering from a high patient-to-nurse ratio, and COVID-19 greatly expanded that number. The study also found that 65% of nurses endure constant beratement, and in some cases, physical assault, from patients. Most don’t feel appreciated by the doctors they are assisting. This is compounded by a current shortage of nursing schools and faculty in the US.

The quit rate among construction workers was 4.7% in August 2022, and in the same month, the industry was short by over 33,000 jobs. Cornerstone, one of the leading publications for the construction industry, expects that the current overall shortage of 430,000 construction workers in the US will expand over the next two years, as new construction projects will increase with the passage of the Infrastructure Investment and Jobs Act in 2021.

Several factors are contributing to the shortage, according to a study by Cornerstone:

How Can Companies Combat Labor Shortages Going Into 2023?

Unfortunately, for small business owners struggling to find workers, there are no easy answers. The labor shortage is persisting, and it appears that it isn’t just a passing fad – it can only be solved by making permanent changes. Study after study has shown that employees in some industries are demanding better pay and benefits, while in other industries, workers are demanding a better work-life balance and better working conditions. The best solution to this problem is to examine the workplace you are providing for employees and look for ways to improve it.