If your marketing helps people avoid needing your products/services, it seems like you might be going in the wrong direction. After all, isn’t the whole point to land more customers? In the right situation, though, this counterintuitive approach can lead to terrific results. Joseph Hoelscher, a DWI lawyer and partner at Hoelscher Gebbia Cepeda, built his marketing campaign on one key concept. They want to stop people from driving drunk so they don’t need services in the first place.

Hoelscher has been practicing law for about 14 years and specialized in DWI for several reasons. “I was good at it, it pays well and unfortunately it happens a lot. Anyone can accidentally have too much to drink.”

After working in this field, Hoelscher has seen plenty of the horrible results from DWI. “I’ve had vehicle manslaughter cases where the outcomes have been just horrific. Clients with serious injuries, losing their kids to CPS, and of course seeing the harm done to victims.”

Even though Hoelscher makes his living from DWI law, he longs to see the day when this is no longer an issue. If it meant him practicing another form of law, he’d do it.

Hoelscher felt uncomfortable with how the typical DWI firm handles marketing. “I’d see a lot of ads where the behavior seemed almost encouraged: hire us and you won’t get in-trouble.”

He wanted to try something different while potentially helping with this troubling issue. Hoelscher and his representatives attend events where people are partying and drinking, like San Antonio’s version of Mardi Gras, the Fiesta Festival.

At the event, they’d hand people cards with a code for a free Uber ride. “We’d put our info on the back along with a slogan, “we’d much rather you pay for an Uber than our retainer.” Hoelscher would also give these cards to parents at college events so they could pass along to their children.

Hoelscher said the response was overwhelmingly positive. “People would get a laugh and make sure to hold onto our cards.” He noted that humor was a good way to bring up the topic. “At these events, people are out to have a good time. We weren’t trying to judge them.”

Even though Hoelscher tried to cut down on DWI with the free rides, he’d still end up getting clients. “People would call, “ah I should have used your free ride.” Or they’d refer a friend, a family member who got in-trouble.”

Ultimately, Joseph Hoelscher finds clients by showing he cares and it shows how you can drive business by leveraging community engagement.

“We’ve also run radio, print, TV, and social media ads. The ROI was better on this targeted, personal outreach.” Hoelscher said they pick events where people are going to be drinking, their target audience, and that definitely helps their ROI versus print, radio and TV where they’re hitting a broader audience.

He also commented that his contrarian approach remains affordable. “We’ve had good success with social media, but the cost per lead had quadrupled over the past few years whereas the cost per lead is still the same for our rideshare campaign.” That’s another benefit of trying something unique, you aren’t fighting for resources with the competition.

Finally, he points out that the rideshare campaign helps get more out of his other marketing. “People take pictures of themselves getting into rideshares and link to our social media. When people see our other ads, they remember ‘oh that’s the guy who helped me avoid drinking and driving.'” 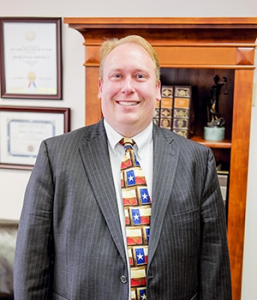 Advice for Other Business Owners

If you’d like to try a similar campaign, Joseph Hoelscher says put yourself in the customer’s shoes. “Where are your customers coming from and what’s getting them in trouble?” In his case, he finds that people often drink and drive not on purpose, but because they didn’t plan on how to get home. His firm gives them that ride home they need.

When customers create problems for themselves, he recommends pointing out the issue, but doing so with humor. “If you engage in nonjudgmental outreach, people appreciate it. You aren’t trying to sell on fear.”

Above all, this style of marketing works. It shows customers you care about them. “I’ve had so many clients say they hired me because I was looking out before they had a problem, not like everyone else who only came knocking after they needed a lawyer.”