Overcoming a hurricane of a problem

For more than four decades, Loretta Harrison, “the praline queen of New Orleans,” has been turning sugar, cream, butter and pecans into savory treats.

She learned the recipe for pralines from her mother at age 8. Together, they made candy on Sundays for visitors to their home. It was a bustling place, filled with sweet smells and Harrison’s 11 siblings. “We didn’t have much money, but we had plenty of love,” she says.

In 1984, she became the first black person to own a praline shop in New Orleans. Loretta’s Authentic Pralines has become an iconic business, and Harrison is an iconic figure in the Big Easy. She appears often on local TV and radio shows, charming viewers and listeners with her positive, down-to-earth personality.

Her enthusiasm was tested, but not broken, by Hurricane Katrina, the August 2005 storm that devastated the city. It caused an estimated $125 billion in damage (not adjusted for inflation). Nearly 1,000 people died. More than one million people in the Gulf Area were displaced.

Harrison suffered as well. Her house collapsed. Looters ravaged her store in the city’s French Quarter. A leaky roof ruined the warehouse where she cooked most of her products. The electricity, gas and water stopped functioning for weeks.

After nearly three months, she was able to reopen the store at the end of October 2005. It still wasn’t easy. None of her employees returned to the city. Her aunt and three sons pitched in to help where needed . Ever upbeat, she cheerfully describes this situation as “free labor!”.

“ It’s about having passion and a belief in your products. God will never put you in a position that you can’t handle. But you also need to seek wise counsel, and not be afraid to go up to anyone and ask dumb questions“.

In the aftermath of the storm, tourists and even locals stopped coming to her store. Her business was buoyed by her steadfast belief that anything which can be destroyed can be rebuilt. She took immediate action, changing her business model to become a restaurant for reporters and emergency workers

“People weren’t buying a whole lot of candy, so we started serving lunch,” she says. “It was an opportunity to help my business, my city, and people who needed help. The city of New Orleans has been good to me, and taken care of me, and I just had to stand up and take care of it.”

She takes pride that her shop became a meeting place. “We lost a lot of people we love and we lost a lot of material things, but we pressed on — it was the only thing we could do.” 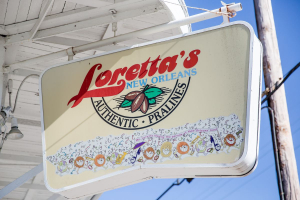 After the storm, she had trouble getting a Small Business Administration loan, or the payment for her business interruption insurance claim for the $80,000 in business she lost during the three-month stoppage. Undeterred, she secured a $2,500 grant from a local small-business incubator. That allowed her to buy shipping supplies for the following Christmas season, expanding her online business and ability to service hotels and retailers.

Asked about her perseverance, she explains: “It’s about having passion and a belief in your products. God will never put you in a position that you can’t handle. But you also need to seek wise counsel, and not be afraid to go up to anyone and ask dumb questions.”

Even though Katrina happened 14 years ago, Harrison is reminded of the storm daily. She says while the business section of the city was repaired, the area around her home still needs renovation. When customers come in, especially tourists, they often want to talk about the storm. Ever chatty, she is happy to oblige, so she and her business will likely be tied to it forever.

In the past decade-and-a-half, the biggest challenge she’s faced is the inability to find workers who want to learn the art of candy making. “And it is an art,” she says. “We put ads in the paper, but people don’t stay; maybe the younger generation doesn’t appreciate this kind of art.”

That slight down note lasts only a few seconds. Harrison seems genetically wired to be upbeat. At the moment, Harrison and one of her sons are the company’s sole candy makers. However, she is confident that younger candy makers will appear soon. “I start positive, and don’t see a point in becoming negative,” she says.

And when she hires those new candy makers, Harrison says she will have more time to do what she loves best — create more types of candies. In particular, she takes delight in her twist to the New Orleans staple, beignets, a pastry made of fried dough. Her recipes have included praline beignets, crab beignets and the hamburger beignets.

“The new products are taking off,” she says. “When someone eats one of my beignets, I see how happy they are, and that makes me happy,” she says.

Editor’s Note: Loretta’s story is one of a six-part series celebrating black small business owners throughout the month of February.  Check out the other inspiring stories in the series: Turning Shakespeare into Rap into Revenue, From Mechanical Engineering to Marketing Consultancy – Building Businesses Through Analytics, and Pioneering Metrics of Diversity and Inclusion.