How I Built My Own Business After Cancer

“I don’t think I would have ever had the courage to start my own business, if I didn’t have cancer,” says Michelle Mekky, the CEO and founder of Mekky Media Relations. 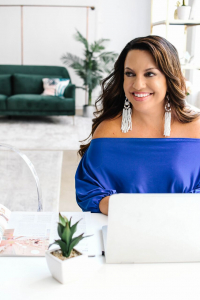 Michelle Mekky dreamed of owning her own business, but the financial risk always felt too great. For years, she’d held senior positions at various public relations firms. She was a loyal employee, she says, who worked late nights and weekends, running international business campaigns.

She’d been working 80-hour weeks, raising two kids, and putting off her annual exams. When she finally went to the doctor, she was told they’d found something, possibly a fibroid mass.

“But I was told it was probably nothing,” Mekky says.  But after seeing an oncologist at the University of Chicago, Mekky was told there was only a 10 percent chance the growth was benign.

Mekky underwent a seven-hour surgery and awoke to learn she had ovarian cancer and a full hysterectomy. “It was such a traumatic experience for me, but it was the turning point. I didn’t immediately start a new business. But it gradually led me to wake up that I had to take more control over my life and go down a new path.”

After returning to work, she switched agencies in the hopes of finding a better work-life balance. In less than a year and a half later, she was laid off from her new position.

“I went home and looked at my family,” Mekky says. “I don’t know which was harder, recovering from cancer, or being told that I just lost my job and having to decide what am I going to do next.”

For the next seven days, Mekky’s husband would ask her, “Did you think of a name for your business?”

“Finally I said maybe just maybe I need to do this.”

She went to see a mentor to figure out why, with over 20 years of experience in the business, she felt tentative. Mekky knew she had connections within the industry and could achieve great things. Her mentor asked a simple question: “What’s holding you back?” Then Mekky’s mentor wrote her a check for $10,000, as a loan, and told Mekky to start her business.

“I thought, if she believes in me this much, I’d better go find a bank and start a business account,” Mekky says. “It was the birth of Mekky Media.”

Mekky used a lean canvas model to reflect on her unique value proposition and how she could provide solutions to client problems she was seeing. She created an S corporation and hired what she says was the key to starting her business: a great accountant and attorney.

Mekky did competitive research on what other people in the industry were saying about themselves.  From there she had to figure out how she could stand out in a crowded field of agencies and consultants. She knew from years in the industry that her personal attention and creative storytelling made her stand out.

“I quickly realized people hire people,” Mekky says. “They don’t necessarily hire a business. It’s the human behind the business that people are hiring.”

It led to 800 percent growth in her business in two years, she says.  This growth netted an invitation to join Forbes Agency Council, a well-known organization of business owners and executives of advertising, creative, public and media relations agencies.

Mekky soon began netting clients such as Abt Electronics, nonprofits like Susan G. Komen Chicago and GiGi’s Playhouse, as well as companies and individuals in the hospitality, fitness and financial service industries.

In November 2018, Mekky was awarded the 2018 Stevie Award for Women in Business with a bronze medal for Entrepreneur of the Year.

“I’ve always had the entrepreneurial bug in me, but I always felt too much obligation that I had to support my family, pay the bills and this was too risky. Having cancer forced me to do something outside of my comfort zone and now I’m also able to take care of myself and create the environment I’ve always wanted to create.”

Editor’s Note: Michelle’s story is one of a four-part series celebrating women business owners throughout the month of March.  Take a look at these other inspiring stories in the series: Launching Your Own Business as a Working Mom.

Getting Over the Entrepreneur Blues