When Amazon acquired organic supermarket chain Whole Foods Markets in 2017 for just under $14 billion, the online retail giant put the grocery industry on notice that it was muscling its way in. Whole Foods has expanded to 500 stores from 468 since, and in August 2020, Amazon launched its first Amazon Fresh hi-tech supermarket and has since expanded to 13 stores. It is also reportedly planning to launch 28 more Fresh stores in the next few years.

Whole Foods, which is known for its healthier, organic food selections, is already an established brand that is always seeking to expand. So what can independent grocers do to survive the expansion plans of the online retail giant?

Amazon’s expansion into the grocery industry casts a looming shadow over the 21,574 independent grocers operating in the US, but independent grocers are still holding their own. According to the National Grocers Association, independent grocery stores (excluding convenience stores), contributed $255 billion to the US economy and were responsible for employing 1.1 million people in 2020. They also account for 33% of grocery sales in the US, and many operate in “food deserts” (low-income areas in which residents, on average, live more than 10 miles away from a supermarket) in which 23.5 million Americans live, according to the US Dept. of Agriculture.

What You’re Up Against

Before you devise a strategy to compete with Amazon, you should get to know the core strengths of the corporate giant. In a nutshell, Amazon’s entire schtick relies on three things: grocery delivery/pickup services, technology, and brand name.

Amazon Fresh was created in 2007 to compete with Fresh Direct in the grocery delivery business and, in August 2020, opened a select number of brick-and-mortar stores that offer cashier-less shopping experiences. Primarily, the stores are used as delivery hubs for local shoppers to let the public know where their groceries are coming from. 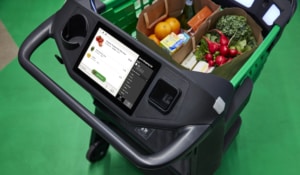 Electronic shopping carts are one of the features of Amazon Fresh stores.

Fresh stores are smaller than the typical supermarket and offer hot-and-cold buffets, brand name items and organic foods. The biggest feature of the store is that shoppers can use electronic shopping carts that automatically itemize the goods being purchased, and they can use Amazon Alexa devices – which are placed around the store – to locate food items. They can also locate stores and order groceries through their regular Amazon accounts.

Independent grocers also must deal with the stellar reputations enjoyed by Amazon and Whole Foods. The fact is that Whole Foods – which also offers grocery delivery and pickup services – is trusted for its healthy, organic brand options, while Amazon is the most popular and trusted online shopping brand in the world.

Goliath Does Have Weaknesses!

If you see the challenge of competing with a giant like Amazon as impossible, consider that, despite its size, Amazon does have three distinct weaknesses: 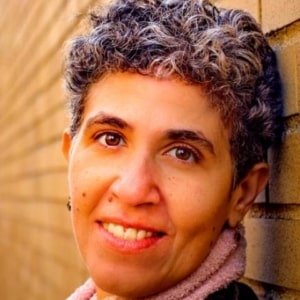 “The main way that independents can compete with Amazon would be to promote their own local brands and depend on the good will of area shoppers,” said Bridget Goldschmidt, managing editor of Progressive Shopper.

“This they can do through various community efforts and philanthropic activities. That is to say, it isn’t just a brand campaign, but a long-term strategy to become an integral part of a community and win the trust and continuing loyalty of local shoppers.”

Whole Foods and Amazon Fresh aren’t going to change to meet the specific needs of the community, but you’re small and nimble enough to. You can offer weekly discounts on food items that you know are popular with your particular community, or special food items that Amazon doesn’t sell.

For example, if there is a concentration of a particular ethnic group in your neighborhood, you may want to make sure you have imported foods in stock from their native land.

Organic food is typically very expensive and is something that Whole Foods and Fresh specialize in, so it’s probably not worth trying to compete with them in that area. You can, however, make yourself an expert on fresh produce and meat and make yourself readily available to customers to explain to them the nutritional benefits and preparation of foods. Doing this would make your customers’ shopping experience personable and keep them coming back.

If you don’t already have a website, you need to build one. Like every other small business, your business needs to show up in local Google searches and your digital storefront has to be attractive. While you’re not going to compete with Amazon and Fresh Foods in the eCommerce space, promoting weekly sales and discounts or offering recipe suggestions and touting the nutritional benefits of various foods on your site can go a long way in catering to your specific community.

As an independent grocer, you generally want to avoid playing to Amazon’s strength, which is the grocery delivery business. However, you can set up a rudimentary grocery pick up service for local shoppers, and you can even make a limited number of grocery deliveries to a select number of customers you know well, such as elderly customers.

For pick up services, you would need to add payment software to your website and allow customers to shop for items directly from your site, and have the items ready for your customers to pick up at your store.

Setting up an expansive grocery delivery service, on the other hand, will require resources such as a new software system, delivery trucks and extra employees that you might not be able to afford. So instead of trying to match Amazon’s delivery service and technology, you would probably be better served focusing on providing excellent customer relations – an area where you probably have an advantage since you know the neighborhood better than the corporate giant.

Get Involved in Your Community

Take advantage of your biggest edge over Amazon: you’re a fixture in your community and Amazon isn’t. Sponsor local charity events and get involved in local philanthropic activities, such as showing your support to the local police and fire departments and hospitals, or the local school sports teams. Set up a booth at your town’s seasonal festivals where people in the community can get to know you.

In all, if you’re an independent grocer and see that Amazon is pushing its way into your neighborhood, it may seem like you’re David and Goliath is staring you down. However, you do have some aforementioned slingshots you can take advantage of. Don’t try to compete with Amazon’s strengths, rather, elevate yours by working harder to cater to your specific community.