It turns out that negative cash flows or dipping sales may not be the scariest things you can face as a small business owner. On top of the many challenges of running your business, imagine having to deal with ghosts and other things that go bump in the night at your workplace?

Those are the experiences of many small business owners around the country who are said to be running businesses haunted by the spirits of long-deceased occupants, many of whom met grisly ends at those locations.

So, in the spirit of the Halloween season, Kapitus found a dozen of the scariest haunted small businesses in America that you may want to pay a visit to if you don’t scare easily. 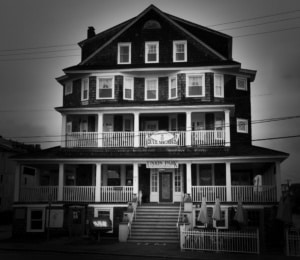 This charming, 125-year old boutique Hotel along the Jersey shore may be picturesque from the outside, but is said to be housing multiple wandering spirits on the inside. In particular, room 10 is said to be the center of the hotel’s paranormal activity. In it, you may hear the sounds of the “Trunk Lady” – the ghost of a woman who frequented the hotel in the 1920s – dragging her luggage up and down the hallway during the summertime, or the ghost of a former servant who is said to make lights flicker on and off for no apparent reason. Guests have also reported hearing knocking on their door and when they open it, no one is there, as well as loud voices in the corridors at night, only to find the hallways empty when they open the door.

This friendly bar in Milwaukee’s Third Ward was built in 1894. In addition to being one of the city’s last 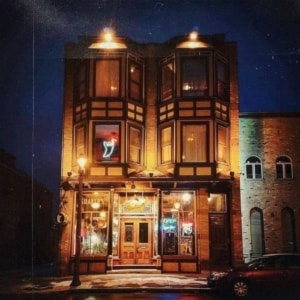 indoor havens for smokers, it also has quite a creepy history. Shaker’s Cigar Bar is said to have once been owned as a speakeasy and brothel by infamous gangsters Al and Frank Capone during Prohibition. The current owners not only offer your favorite cocktails and cigars, but also give ghost tours. The bar is said to be haunted by the ghost of  a prostitute who was murdered a century ago by a jealous man on the premises – and if that isn’t enough to freak you out – when the building was renovated in 2001, 70-year-old human remains were found in one of the walls. The building is also said to have been built over an old Native American burial ground. Non-believers and those with nerves of steel can even pay to stay in the building’s third-floor penthouse for the night. Netflix’s episodic drama about haunted tourist spots, “Dark Tourist,” even featured the bar on one of its episodes in 2018. 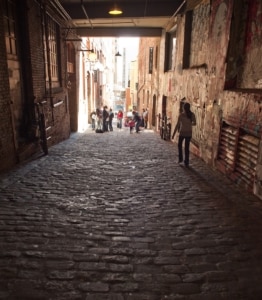 At 194-years-old, Pike Place Market is one of Seattle’s oldest and largest public shopping centers, and has only recently reopened after being shuttered due to COVID. It’s known for retail shopping, fine in- and outdoor dining, a Farmer’s Market, and ghost tours run by Market Ghost Tours. There are several ghosts that are said to be roaming around the bustling Western Avenue end of the marketplace, including that of a 19th century native American princess, Angeline, who has supposedly been spotted by many patrons over the years. On the First Avenue side of the marketplace, visitors may catch a glimpse of “The Suspender Man” floating near Kell’s Irish Pub, which was formerly a mortuary. The ghost is said to be of an unknown man wearing suspenders and a cowboy hat, and can be seen in the window above the pub.

This quaint bookstore, which specializes in selling used and out-of-circulation books, is also said to be

the home of the ghost of Sam Baldwin, the former owner of the 150-year-old building in which Browse Awhile Books resides. The building was once a hardware store, a small supermarket and a bakery. Employees of the two story bookstore have claimed to have seen Baldwin’s ghost wearing a hat and a dark overcoat staring aimlessly at the bookshelves, then disappearing into thin air. If you plan to visit Browse Awhile Books anytime soon however, you shouldn’t worry: the bookstore’s owner and employees all say that while it’s certainly startling to see Baldwin’s ghost, it is harmless and doesn’t bother anyone.

Built in 1928, this office tower is nicknamed “the Coyote” because the front of the building resembles a

coyote howling at the moon. Some of its small business tenants have reportedly seen shadowy figures in the hallways at night and heard doors slamming shut by themselves. A few years ago, one of its tenants, financial advisor Matt Libman, conducted a paranormal investigation of the building using his sideline operation, the Second City Paranormal Research Co. The investigation is said to have caught whisperings on tape when no one was around, as well as a voice that repeats the word “ladder.” 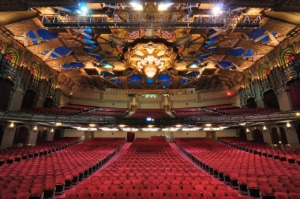 The 2,812-seat Pantages Theater was built in 1928 to present films and live plays and is still in operation today. It is also said to be haunted by multiple spirits. When renovations were being done on the building in 2000, an electrician and a painter working on the theater actually quit their jobs because they claimed to have seen a spectral figure hovering over them on several occasions. It is also said to be haunted by the spirit of a failed female singer from the turn of the 20th century, as well as the ghost of its original developer, theater mogul Alexander Pantages. Witnesses have also claimed to see the spirit of legendary business tycoon Howards Hughes, who once had an office on the second floor of the theater, as well as the ghost of a former building supervisor who is said to still be roaming the hallways inspecting the structure.

Dubbed by many as the most haunted hotel in America, the 1886 Crescent Hotel & Spa has quite the 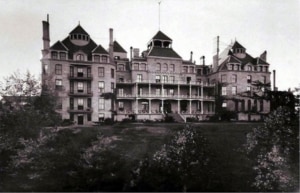 supernatural history. In 1937 the building was acquired by a well known radio personality at the time, Norman G. Baker. Baker claimed to have the cure for cancer (despite not even having a medical degree) and turned the structure into a cancer hospital where hundreds of patients reportedly died. Numerous guests have reported witnessing ghosts of deceased patients wandering its hallways. In 1997, Marty and Elise Roengk purchased the hotel and, almost immediately, hired a medium who held a seance in the hotel. The medium claimed that the building itself is “a portal to the other side” and in a dimension that “holds the spirits of the dead.” The hotel is one of the featured attractions in many ghost tours in Eureka Springs, and is the subject of an episode of a show about haunted houses on Fuji National Television. 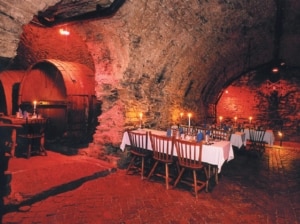 The bowels of this microbrewery – one of the oldest in Pennsylvania – contains three restaurants and distillery catacombs that are said to be haunted by several spirits. It has been the subject of many episodes of paranormal TV shows, and the owners conduct regular ghost tours, especially around Halloween. Built in 1876, witnesses have claimed to have seen the ghost of a middle-aged man standing at the bottom of a staircase, spectral images of children playing in the courtyard, and have heard inaudible whispers when no one is around. Glowing figures have been seen floating across the floor of the catacombs, and some restaurant patrons claim to have spotted a phantom couple sitting – and then vanishing – at one of the tables.

This well-known eatery in Southern Florida is famous for its American cuisine, stained glass windows 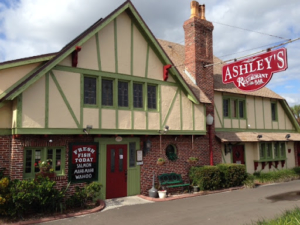 and ghostly residents. The establishment, located in a 150-year-old building, is said to be haunted by the ghost of Ethel Allen, a 19-year-old woman who was brutally murdered nearby in 1920. While her murder still remains unsolved, her ghost is said to be found in the women’s restroom. Many female patrons have claimed to see a set of feet wearing 1920s style shoes under the door while they were in a stall, only to find no one there when they opened the door. Diners have also reported seeing her apparition behind them in the bathroom mirror, and employees have complained on more than one occasion that they can feel an unseen force pushing against their backs as they go up and down the stairs. 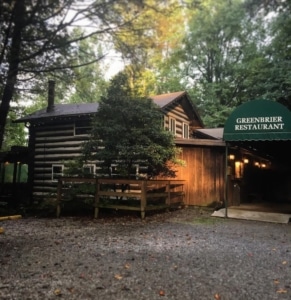 The Greenbrier Restaurant is known as one of the most haunted places in the Smoky Mountains region. While the restaurant, which survived through the worst of the COVID-19 pandemic, serves fine American cuisine, it also has a disturbing history. Built in 1939 as the Greenbriar Lodge and Inn, a woman known only as Lydia was scheduled to be married in 1940 at the nearby Gatlinburg church, only to be jilted by her fiancé at the altar. As legend has it, Lydia was so distraught that she ran to the Greenbriar lodge afterwards, threw a rope over a rafter and hung herself. Coincidentally, the partial remains of her fiancé was found only days later in the forest near the lodge, with many speculating that he had been attacked by a mountain lion. Patrons have claimed to see a heartbroken Lydia sadly sitting on the stairs, and hear sobbing in the hallways when no one is there. 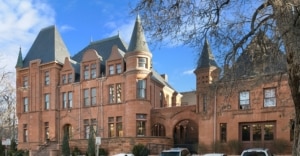 Built in 1891 by wealthy business tycoon Thomas Croke as the Croke-Patterson Mansion, the Inn is widely believed to be the most haunted house in the Denver metro area – so much so that a book has been written about it, and the Inn was featured on an episode of the Travel Channel’s paranormal documentary show “Portals to Hell” in 2020. Many guests have claimed to see the spirit of Croke’s wife and mother – both of whom died in the house – as well as shadowy figures out of the corners of their eyes. Over the years, other guests claim to have heard the sounds of phantom dogs barking. Also, as legend has it, one can sometimes hear the cries of a baby whose body is said to still be buried underneath the basement.

The Kehoe House may seem like a charming and romantic Southern bed & breakfast, but it is said to be covering up a mass of supernatural activity. According to urban legend, the house, built in 1892 by businessman William Kehoe and his wife to house their 10 children, was built over an old cemetery and the bodies still lay underneath it. Two of the Kehoe’s children – twins – are said to have died in the house, and guests have reported hearing children’s laughter at night and feeling someone stroking their hair and cheeks as they lay in bed. Local tourist company Old Savannah Tours regularly features the house as part of its ghost tours of the city.

The Cost of Opening a Dental Office
Scroll to top