On July 3, 1844, a young abolitionist in Boston named Macon Bolling Allen did something that was unthinkable at the time: he embarked on a 50-mile journey (reportedly by foot) from Boston to Worcester, MA to take the bar exam so that he could practice law in the state.

Once he passed, Allen became the first practicing black Lawyer in US history and would go on to become 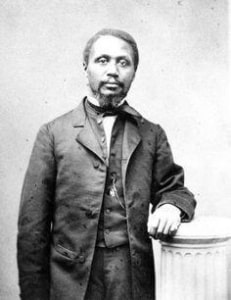 Macon Allen Bolling walked 50 miles to become the first African American lawyer in the US.

the Justice of the Peace in Middlesex County. After the Civil War, Allen moved to Charleston, SC where he believed his legal skills would be more useful. He ultimately became a judge on the Inferior Court of Charleston, which also made him the first African American judge in US history.

Allen may not have realized at the time that his 50-mile journey would lead to a proud legacy of African Americans making their mark in the legal world.

This week, Kapitus is moving on from hair care products and focusing on one of the individuals who followed in Allen’s footsteps: Maria Barlow, the remarkable founder and owner of her own boutique law firm in Chicago’s rough-and-tumble Southside near where she grew up, The Barlow Law Firm. The firm was launched in 2011 and specializes in family law, conceal-carry defense cases, workers compensation and estate planning, among other areas.

The firm now subcontracts 10 attorneys and paralegals and prides itself on giving back to the community by offering affordable and aggressive legal representation. 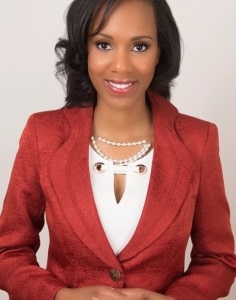 Maria Barlow decided to pursue her passions by opening her own law practice for the underserved.

Barlow grew up in a family of 11 children and said she knew she wanted to be a lawyer from an early age. Now, as a single mother and head of her own practice, Barlow has gained a reputation as a community leader. In 2018, she campaigned for Cook County Commissioner’s office before narrowly losing the race to another primary contender. She also aids minorities in rebuilding and buying homes in their own communities.

Much like Macon Bolling Allen’s 50-mile trek to take the Massachusetts bar exam, Barlow’s journey to launching her own firm was arduous since she was a woman of color and she graduated law school in the middle of the Great Recession. She spent three years as a prosecutor for the city of Chicago. After her stint as a prosecutor, she tried to get a job at private law firms, but found that the barriers for entry into that world were too much to bear.

“When I graduated law school, many jobs were not hiring,” she said. “There was a huge hiring freeze so finding a job was next to impossible. The firms I did apply to had zero firm members or attorneys who looked like me. Visiting offices and observing their ‘culture,’ I knew I would never fit in. I wanted to work where I felt comfortable and supported,” she said.

Creating Her Own Culture 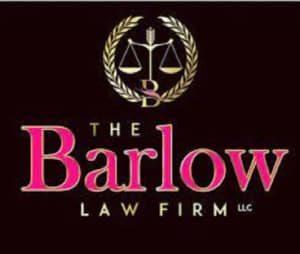 The Barlow Law Firm has thrived on Chicago’s South side.

and realized that if she wanted to break down barriers for people such as herself, she would have to start her own firm.

“Working where I was the only person of color was not an option,” she said. “I had worked in those environments before. The jokes about other minorities were not funny and I knew when I wasn’t in the room the jokes were about me and or other blacks. I refused to spend my career in an uncomfortable environment. I decided to start my own firm so that I could create the culture I felt comfortable in and for others like me. A culture that welcomed everyone and worked to ensure everyone ‘fit in.’”

Race is Still an Issue

Sadly, even though the US has come very far when it comes to racial equality, there are still racial barriers that need to be broken down, said Barlow.

“Racism is alive and well in our profession,” she said. “It happens in court and outside of court. Unfortunately, all too often we are treated as inferior to our counterparts. One issue that I face is my office’s location (referring to the fact that her office is in a relatively low-income neighborhood in Chicago). Some people want to have a ‘downtown’ attorney, whereas I am located on the southside so that can have the appearance of ‘less than.’ Another huge issue is, unfortunately, some African Americans believe they will get less quality service from our businesses or that we should charge less or work for free because we are African American.”

Barlow also said that – like most small businesses – she has had to make adjustments to survive the COVID-19 pandemic.

“Dealing with the pandemic has been extremely difficult,” she said, “My clientele has changed because so many people are not working and cannot afford legal services. Staffing is a constant issue, so we have had to allow staff to work remotely to keep viable talent with our firm.”

Advice to Other Small Businesses

One of Barlow’s main pieces of advice to any person seeking to launch their own business is to not try to do everything at once at the beginning, and to make sure you offer great client/customer service.

“Just do it!” said Barlow, referring to anyone thinking of launching their own business. “Being a small firm doesn’t mean we cannot give great service to our clients. Treat every case like it’s your last (get a bad reputation and it may end up being your last one). Clients usually don’t say thank you so do not expect that. They will surely thank you with referrals! Also do not start out with more than what you need, rent a small place and grow as your clientele grows, do not take on more than what you can handle.”

As Black History Month Continues, Kapitus will continue to profile African American-owned businesses and how they are making a mark in their community. In our next spotlight, Kapitus is going to the other side of the Windy City to profile Layla Bitoy-Dillon, founder and owner of Bitoy Sweet Treats, who recently reopened her shop and has managed to evade the massive hits that the food and beverage industry took during the COVID-19 pandemic to thrive.

Shipping Unboxed: How to Set Up a Shipping Schedule

Seeking Inspiration? Check Out the 10 Best Ted Talks of 2021 for Small Busi...
Scroll to top